Mr. Krall Through The Years...
and some of the places I've gone. 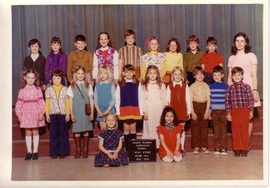 This is MY 1st grade classroom picture! Can you find me in the 1st (standing) row? 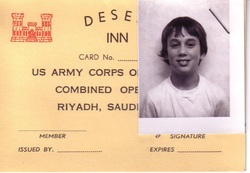 In 1977, when I was 11, my family moved to Saudi Arabia for 2 1/2 years. This (I think) was my temporary PX/Commissary card just after we arrived in Dhahran in January. For the first six months we lived in Al-Khobar on the Corps of Engineers' compound. In June of 1977, we moved north to Jubail. For the next two years I called the King Abdul-Aziz Naval Base my home away from home. 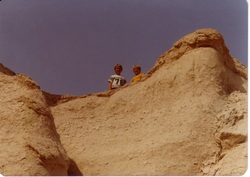 This is my brother and I standing on top of a sandstone formation outside of the small town of Hofuf, Saudi Arabia. I'm on the left, wearing the Seahawk shirt. 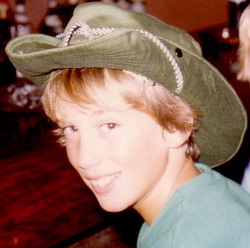 This is me in Amboseli National Park in Kenya. My family and I were there for a 10-day African Safari! That explains the safari hat. While in Amboseli, we watched a cheetah stalk gazelles in the shadow of Kilimanjaro (Africa's tallest mountain). In the lounge, where this picture was taken, a galagos (a small primate with big red eyes) climbed up my arm and sat on top of my head! I'm glad I had my safari hat on.
International travel was just one of the perks to living in Saudi Arabia. 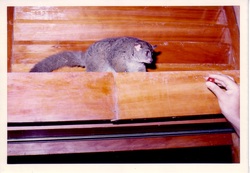 ...And here is a picture of the galagos that climbed up my arm and sat on my head! 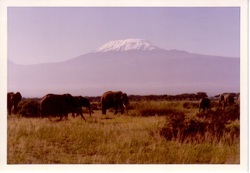 Here is another picture from Amboseli National Park. Mt. Kilimanjaro in the background, and elephants in the foreground. If this photograph looks familiar, it's probably because you've watched The Lion King. Take another look at the opening sequence of the movie and see for yourself! 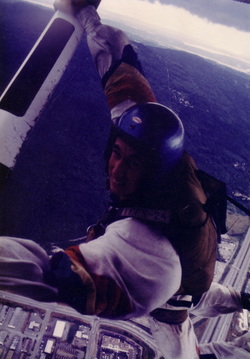 What better way to celebrate graduating from high school than jumping out of a perfectly good airplane?
This was quite the challenge, considering I'm afraid of heights! I try not to let fear get in the way of something I really want to do. Parachuting was something I wanted to try since watching it on ABC's Wide World of Sports when I was in elementary school.
BTW... It's difficult to smile while you're terrified, hanging on to the wing of a plane that's going 70+ mph! 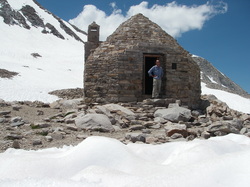 This photo was taken on July 16, 2006 while hiking 2,200 miles on the Pacific Crest Trail.
The Muir Hut at the top of... Muir Pass. This section of the PCT was the snowiest by far! Finding the trail was impossible, as it was covered in snow. When I saw the hut, I was more than relieved! 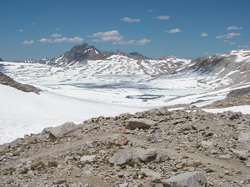 The view of things to come. Looking north from the top of Muir Pass. 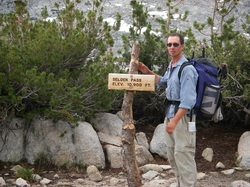 This is me at Selden Pass, CA (July 17th, 2006). Still in the High Sierra. I like this picture because it shows how little I needed to carry on my back. When I started my journey at the Mexican Border, I had a different pack and a lot more "stuff" in it. 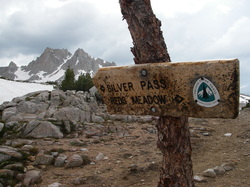 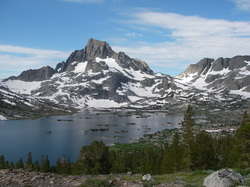 This is Banner Peak and Thousand Island Lake, just north of Mammoth, CA. I camped at this spot on July 22, 2006. The photo was taken the morning of July 23, the day before I made my way into Yosemite National Park.
This is an iMovie I recently put together with some of my favorite photographs from my Pacific Crest Trail hike. The direction the photos move is the direction I was hiking. In order to see the iMovie without it being "choppy", click play and then hit pause and wait several minutes. That way, your computer will be able to download the file and you'll be able to watch the photographs move smoothly across your screen. I recommend wearing headphones.
Enjoy!     :  ) 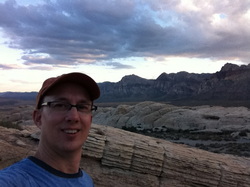